Below is another great submission from Ken (creator of the HomeMade Rotary Trommel Screen).

“You may remember me as the builder of the red rotary trammel.  I later built a shaker screener because I needed to separate soil and larger stones from 1 inch stone I needed for a driveway.  I made it to screen a 3 cubic yard pile of dirt from an excavation.  I wanted the soil for filling low spots in the lawn, 1 inch and smaller stone for the driveway and the larger stone as fill to enlarge an area that needed good drainage.

The shaker is actuated by an eccentric weight and motor that came from a scrapped 5 gallon paint shaker 3/4 hp electric motor.  I originally planed on spring mounting the shaker section on a chassis, but realized I could just mount the machine on rubber tires and let the whole machine shake.  The rest is 2×4 pressure treated lumber, bolts, 2 5/8 inch axles and 4 10 inch pneumatic tired wheels.  The tires are barely inflated to act as springs.

Before starting the machine, so I run it a few seconds to see which way it wants to go, then drive a couple of stakes in the ground and tether the machine with bungee cords so it doesn’t wander away.  To date, it has over 125 hours of use with only one change of screen wire.  The first section is 1/4″ mesh, the second is 1″ mesh, so I get 3 products delivered into the garden trailers and wheelbarrow. The mechanism has since been enclosed.  I also added a board partially covering the screens close to the motor, to keep stones from being thrown out.

Below are a few shots of the sifter and mechanism.  Note that the pulley and opposite end flywheel have eccentric sections, normally they are set up to increase the action.  I found it was too violent so I swapped them l to r, which put their bob weights opposing the center weight.  That reduced the action to an acceptable level.

I had fun building it and it has elicited as much amusement as amazement from friends watching it at work.

Because the shaker has three products (sizes of material) delivered into three receivers, and I have two little trailers and garden tractors to haul them, the third output went into a wheelbarrow.  Being dissatisfied with having to unload a trailer first, then transfer the barrow load into it, I built a powered, manually dumped wheelbarrow out of stuff I had laying around plus a murray garden tractor front axle and a forward-reverse riding mower transmission from eBay.  Tiller steering lets you walk ahead of or behind the machine.

The engine came from an old 3hp rotary mower.  The more than 10 cubic foot box, filled level with I inch gravel carries a 900 pound load up my back hill at walking speed. With a reduction ratio of about 48 to 1, rear axle torque is about 450 foot pounds, or about 800 pounds of pulling power.

I did have to fill the drive wheels with windshield washer fluid and put chains o them to be able to climb the hill.

Here is a video of the power barrow, or donkey, I built, in action.  The uphill grade is 17degrees or a 30% grade, the load is 9 cubic feet of wet gravel, crushed stone and saturated sand weighing about 160 pounds per cubic ft., totaling about 1440 pounds.  The next load it carried was the full 10 cubic ft., 1600 pounds, which translates to 480 pounds of pulling power or 320 foot pounds of torque at the rear axle. The 3hp Briggs engine didn’t even slow down on the hill.  I’ll have to see if it will pull a loaded trailer uphill, too.

Below are some pics of the donkey, showing that it was built by mounting everything to a piece of 3/4″ pt plywood, then adding stiffeners as structurally necessary.  The 3hp Briggs engine came from an old rotary push mower, the fwd/rev transmission from an old riding mower, the countershaft, rear axle bearings and trailer hitch from the paint shaker I used to build the shaker screener  the total reduction ratios provided a 2mph speed at 3000 engine rpm. 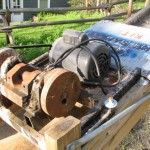 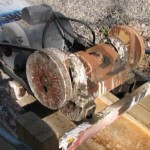 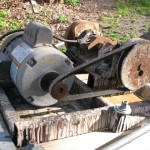 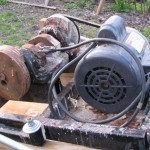 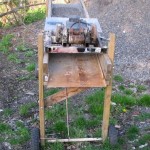 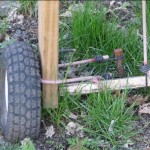 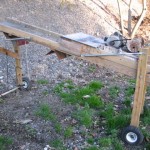 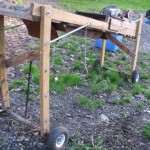 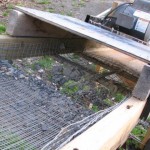 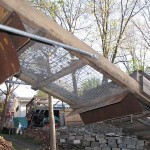 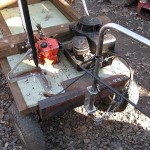 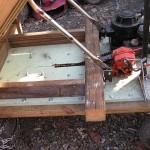 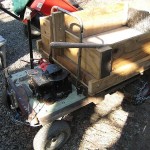 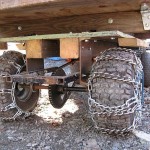 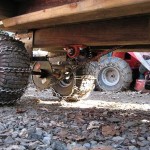 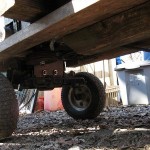 The mower engine depends on the blade for flywheel effect, the engine flywheel is really only a blower for cooling air and a holder for the magneto magnets.  To compensate for the missing blade, I added a heavy 8″ diameter cast iron v-belt pulley to the crankshaft.

I finally weighed the material shown in the barrow video.  It comes to 100.7 pounds per cubic foot, so the actual load in the video is 906 pounds.  The next trip I filled it to a full 10 cu. Ft., about 1007 pounds, which did not slow the machine going up the 30% slope.

The loaded donkey will not pull a trailer with a 400 pound load up the slope.  It would need a bigger engine.  However, with the loaded trailer, it is a pain to maneuver, and puts extra strain on the driveline.  It would be no problem on a lesser slope.”